Does your car’s temperature gauge report a super-high temp, and you don’t know whether or not to stop and take the car to a shop? Overheating is not that uncommon, but with proper care, you can prevent it, and if it does happen – stop it. People that live in areas that get exceptionally hot summers know exactly what I’m talking about.

An engine can overheat due to a lot of different reasons, and, to be fair, most of these causes are easily manageable. But, before you start preventing and fixing, you must first learn how to recognize the issue, and its source. In the next few following sections, I will take your through the most common issues when it comes to high engine heat. And, of course, we will go through the common solutions and the best prevention methods. Let’s get right into it.

Contents show
Why Do Engines Get Hot?
1. Stop and Go Driving Style
2. Damage
3. Defective Radiator Cap
4. Rust on the Radiator
5. Towing
6. Simple Wear and Tear
Engine Overheating – How to Spot it?
How Hot Does a Car Engine Get?
What Happens When the Engine Overheats?
What to Do If Your Engine Overheats?
Wrap Up

Why Do Engines Get Hot? 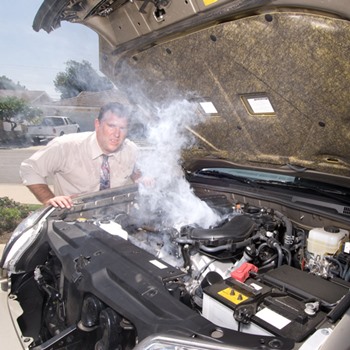 But, as far as energy goes, it is impossible to utilize all 100% of it, so naturally, some energy will escape the system in the form of, you’ve guessed it – heat. The engines get pretty hot. In fact, the engine gets so hot that a car won’t run without a dedicated cooling system. Now, various engine models are rated for different working temperatures. However, the temperature that the gauge in your car reports is that of the coolant. Metal parts can take much more heat before damage takes place, but the coolant has an upper limit before it loses its functionality.

Knowing all this, we can narrow down the most common reasons for engines running a bit too hot.

Believe it or not, the way you are driving your 4-wheeled friend can significantly affect the engine’s temperature ratings. You know those racing cars that specialize in acceleration and deceleration? Well, those huge engine parts that are visible from the outside are all there for cooling reasons.

Stepping on the gas pedal and stopping shortly after puts the engine into overdrive. Now, I’m not saying that you should never put that pedal to the metal, but doing it often may put too much strain on the engine. This, however, doesn’t count if you have a dedicated cooling system designed to handle the stop and go driving style.

People that spend a significant amount of time off-road (or on dirt roads) know that the driving on not-so-fixed surfaces can damage the car. One integral part that gets damaged from road debris is the radiator, or channels leading from/to it. If the radiator can’t do its job properly, the engine temperature is bound to go up.

But there is more to this than just pebbles and rocks. In the winter, road salt can damage the radiator in more than one way:

You may think that the radiator cap only represents the physical barrier between the cooling system and the outside world. While this is one of the features, the main purpose of the radiator cap is to hold a certain pressure as well.

The cooling system operates under pressure. The fact is – it works best under constant pressure, and a faulty radiator cap messes that pressure up. A cap like this won’t cause the engine temperature to rise instantaneously, but the cumulative effect can be felt after a hundred-mile mar.

Another reason for making sure that the radiator cap works properly is debris. The cap prevents radiator contamination because – if dirt and rocks get into the tubes, they get into the intricate cooling system which is not designed to handle solid material all that well.

4. Rust on the Radiator

The radiator is designed to cool down the coolant (aka antifreeze) and send it back into circulation, making a full cycle between the coolant reservoir and the engine block. Radiators are made with as much contact (cooling) surface as possible, which makes them look like a matrix or a honeycomb. The coolant goes through this large-surface metal construction, letting air cooling it, and then it goes back into the engine block.

This is why the radiator is made of metal that dissipates heat quickly and effectively, typically brass, copper, or aluminum. But, if rust catches on, an additional layer of it blocks the heat dissipation, reducing the overall effectiveness of the radiator.

Similar to the stop and go driving, towing puts extra strain on the car. I mean, instead of providing the force for moving one, the engine now provides for two cars. If you tow other vehicles often, or you use a trailer, you need to maintain your car’s cooling system twice as often.

So, when you do need to tow all that extra weight, try to do it without sudden speed changes. Consistency is the key here. It is better to drive slow and steady while towing than to step on it whenever you get the chance.

Lastly, one of the most common reasons for engine overheating is the one we all suffer from – time. Modern cooling systems, if regularly maintained, can last up to 10 years. Older models containing no plastic parts can last as much as the car, but that is becoming ever so rare.

If you owned your car for about a decade, and you can’t remember when’s the last time you invested in a cooling system makeover, it is time to go to a professional and get it done. You don’t want your engine to boil in the middle of the road, trust me.

Engine Overheating – How to Spot it? 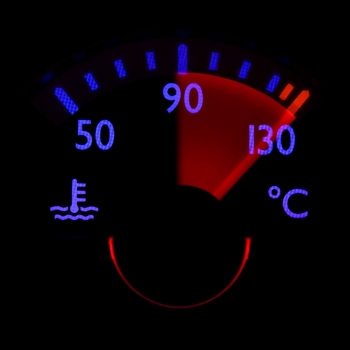 Most likely, you won’t be able to tell that the engine heat is rising on your own. Nowadays, every car has some sort of gauge that reports the temperature from the cooling system. If you do feel the heat rising inside the car, turn the car off and step out immediately. This means that something under the hood is way hotter than it should be, and situations like that are dangerous. However, with the modern diagnostic systems, the chances for this are astronomically low. I just wanted to put it out there, because – while the chances are low, they are never zero.

So, there are several ways to spot an engine’s temperature rising above normal:

How Hot Does a Car Engine Get?

If we were to stay within the nominal limits, an engine of average size, or rather its cooling system, reaches the temperature between 190° and 220° Fahrenheit. However, without any aftermarket tinkering, your car will probably be able to handle the heat of up to 250° F before it starts breaking.

What Happens When the Engine Overheats?

If the temperatures spike, breaking the 250° F limit, the engine overheats, and driving the car becomes dangerous. However, there is a difference between a slight spike of 10-20 degrees and more serious ones that can go even 100+ degrees over. Here are a few examples of what to expect:

What to Do If Your Engine Overheats? 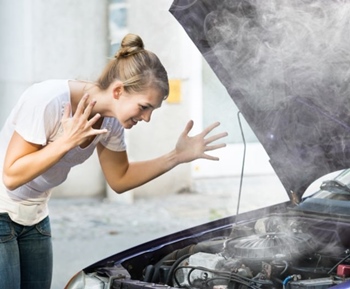 If you recognize any of the symptoms we talked about in the sections above, you should be ready to take some steps to preserve your car’s health and overall safety.

And there you have it – everything there is to know about engine heat and how to deal with it. Of course, all this is a combination of science and engineering, but I am a firm believer that everyone should be able to take care of their car. As I always say – fixing your car on your own is a special type of independence.

Hopefully, I have taught you not to panic in the case that the car gets hot. Try applying the solutions I provided, and if everything fails, well – a visit to the town’s mechanic is due. However, there is nothing more satisfying than fixing an issue that would take precious time (and money) of your hands. Now, go to the garage and check on the cooling system, the coolant solution, and the radiator cap. Your car deserves it.