You wake up, prepare for work, get into your car, turn the key, and – nothing. If you’ve been driving for at least a year, the chances are this situation is more than familiar. The issue can be one of many, from simple things like temperature to complex engine problems. But I am a strong proponent of the saying “if you hear hooves, think horses, not zebras”.

In the case of a bad start or no start at all, these car issues are traced back to one of the two main culprits – battery and the alternator. Sounds confusing? Don’t worry, I’m about to shed some light on these common problems, without getting too technical, of course. So, buckle up, and let’s get to the bottom of this.

Car Battery – What is it and how does it work? 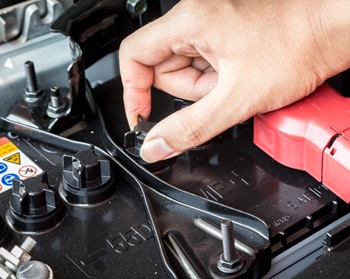 Ok, so you are surely aware of the fact that a car is a complex machine. Getting the engine to run and spin the wheels is the sole purpose of a vehicle, yes, but there is so much more to it. Every car (besides some hybrid models) have a car battery somewhere under the hood.

In its essence, the car battery is a power source, just like any other battery. It consists of cells that include a strong acid and two metallic ends, the + and the -, a polarized duo that enables the electricity to flow. This electricity comes from chemical processes, but the point is – the DC power provided from the battery is a legit power source.

Each car battery has a voltage (typically 12V of DC) and capacity expressed in Ah, aka Amp-hours. The battery recharges constantly with the help of an alternator (more on that in a moment), and it should never be depleted fully. So, it is a virtually never-ending cycle of charging and depletion. A normal car battery uses about 3% of its power to start the car, which it “renews” quickly, once the engine starts running fully.

Just as every power source can serve all sorts of purposes, a car battery has two main roles that branch out into several. Told you, cars are complex things. Here are the basics that every car owner should know, in my humble opinion. Here’s the thing – if you know how stuff works, especially the core car parts, you will be able to diagnose better and ultimately solve the problem.

SLI stands for starting, lighting, and ignition. Easy to remember, and a concept easy to grasp. This SLI concept is considered to be the absolute basics of car batteries – the features remained the same for a long time, with slight variations as technology progressed. However, if this role of the battery fails, you are down on luck, because nothing else in the car is going to work properly.

The car battery is there to provide the initial “jolt” of electricity needed to get the engine going. I am referring to engines with internal combustion, of course, because electric vehicles have a different car battery system. This electricity works with the spark plugs to ignite the gas-air mixture inside the engine, which in turn starts moving, and you know the rest.

So, the basics functions of a car battery are just that – starting, lighting, and ignition. If the batter goes down, (by depletion or otherwise) these functions are the first to go. But there is more to this whole ordeal.

In a modern vehicle, you should be able to use all of the electronic parts without actually turning the engine on. This happens thanks to, you’ve guessed it, the car battery. Music, lights, windows, the 12 V lighter socket, everything is fair game. However, abusing this feature leads to super-fast battery depletion. This doesn’t mean that the battery is done for, but it will need a recharge or a jumper cable connection with another vehicle.

Besides the stuff that you need on a regular basis, car batteries also power the rest of the electronics. Car diagnostics, GPS, car alarms, the sound system, etc. Everything needs electricity to run, but you do not change the battery often. How come? Well, that is the point where the alternators kick in.

3. Symptoms of a malfunctioning car battery

Vehicle diagnostic systems (that every modern car has) are reliable to a degree. Sometimes, the onboard computer can give you little to no info on your car battery. Of course, if the “car battery” light shines up on the dashboard, the search is over. But what do you do when that is not the case?

Well, the very first giveaway sign is a bad car ignition, or a lack thereof. If the engine doesn’t start at all, a battery may be at fault. On the other hand, if you can’t even start the electronics in your car (that sequence before the engine starts), then you might have a dead battery on your hands.

One way to check for this is to jump-start your car using a healthy battery. If the jumpstarting works and the engine fires normally, you are out of luck and out of car batteries, and it is time for a recharge /replacement.

Before you dismiss the battery as dead or try to recharge it, I suggest you thoroughly inspect it. Corrosion, damage, leaking – these signs should tell you that a battery change is long overdue. Another way to distinguish a dead battery form a drained one – the dead battery will give no sounds on starting attempt and a drained one will “click” when you turn the key. 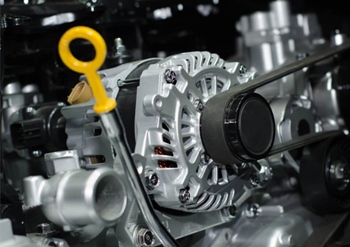 So, something needs to charge that battery that is constantly being used while the car is running, or sometimes even when stationary. That little something is a device (or rather a system of devices) called – the alternator. I’ll stay in the layman’s terminology, so don’t worry – in 5 minutes you will be armed to impress your town mechanic.

As the name suggests, this generator produces AC (alternating current). Somewhere along the way, this AC is turned into DC through a rectifier. But charging the battery isn’t the only thing the alternator is in charge of.

While the engine is running, the alternator powers the electric devices and lines in your car – a task the car battery is in charge of when the engine is turned off. So, once the problems with electronics start, an inexperienced driver may not be able to determine whether it’s the battery or the alternator. So, what gives?

Symptoms of a malfunctioning alternator

Alternators are more complex than car batteries, there is no doubt about it. However, diagnosing a bad alternator can be easier in some cases. Here’s the caveat – if the alternator goes bad, the battery needs to take over and supply the power to every electric part of the car. Since batteries are not designed to provide the juice constantly, the symptoms are easier to spot.

The very first thing that may happen is that the dashboard will tell you that something is wrong with the charging system. After all the alternator is in charge of charging the battery (pun not intended). But, as already mentioned onboard diagnostics can sometimes be wrong.

Here’s a simple way to check whether or not the alternator is doing its job:

Start the car, put it in park, and pop the hood open. Get out and get to the battery. Be extra careful because some parts might be hot. Now, all you need to do is – disconnect the positive terminal on the car battery (+). Wearing protective gear is a bonus. If the car stops after you disconnect the positive terminal, your alternator is the culprit.

Another symptom of a bad alternator is unstable electricity. You don’t have to do anything but observe. For example, if the headlights start dimming randomly, or they shine too bright for a second and dim down, this is a clear sign that the electric current powering them isn’t stable.

You can also play some music while the car is on. Yeah, music. If the speakers play distorted sound, the alternator might be at fault. This method of diagnostics is not that reliable because car stereos are different and the source of the problem may range from loose wires to bad speakers.

Can a car run with a bad alternator?

Remember, once the alternator fails, all electronics start drawing power from the car battery, which is designed to start the car and nothing else. Since there is no alternator recharging the battery, you can get about 50 miles of drive time, and then everything shuts down.

Driving a car with a faulty alternator is also dangerous to a degree. For example, a malfunctioning voltage regulator will start overcharging the car battery. The battery cells do not have a way of releasing that extra energy, except for, you guessed it – heat. Since car batteries are essentially boxes full of strong acid and lead, bringing the heat up is not a smart idea – the acid will boil and the cells will get destroyed.

So, to summarize – a car can run with a bad alternator, but you should avoid this if you value safety and you don’t want to ruin your car battery.

Can Jump Starting Help with a Bad Battery/Alternator?

If the alternator is producing an insufficient amount of energy, the battery may get charged a bit, and that’s it. If you keep the donor car connected for longer and charge up your battery, you get to drive until your car battery is dead.

Fun fact – during the process of jump-starting, the donor battery charges the recipient battery. But the donor can’t get empty. The reason why the donor car’s engine must be turned on is to get the donor alternator running, producing energy for both batteries (donor and recipient).

So, in a way, when you jump start a car, the donor alternator is charging two batteries at the same time. There is no risk in jump-starting, but the whole process is extremely time-consuming and inconvenient, especially if your battery or alternator dies in the middle of nowhere.

Vehicle maintenance, no matter how exhausting it seems, is not that hard. I know that a lot of people would rather just drive their car to the town mechanic and leave it there until it’s fixed. But, sometimes, knowing how to diagnose, and potentially solve a simple malfunction, is way easier and definitely cheaper.

I encourage you to take the matters into your hands and learn the intricacies of your four-wheeled friend. Knowing how to resolve simple car issues is a special type of independence, so go get it!